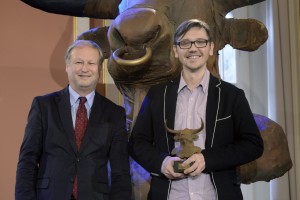 The winner in this category was for the majority of the jury the radiophonic highpoint of the week. It is conceived in terms of pure sound and uses both storytelling and technical craft to keep listeners on the edge of their seats. Superbly written and directed, it combines accessible surrealism with humour to depict madness in a clever and witty way. The jury enjoyed the ironic reflection of their own profession and the warmth and optimism of the production. It is a special pleasure to listen to this brave montage of soap opera, existential angst and archive recording of a classical text, performed by a well known Polish voice.
The winner of the PRIX EUROPA for the Best European Radio Drama of the Year 2013 is Andy by Krzysztof Czeczot entered by Polskie Radio S.A., Poland. (Lautador: Stephan Abarbanell, Head of Culture at Rundfunk Berlin-Brandenburg).

Synopsis:
Andrzej is a sound engineer. He’s been working from home for several months now. He takes on spot work, but his long project is an audiobook „Moscow-Petushki“ by Yerofeyev, interpreted by the Tate great actor Roman Wilhelmi (this audiobook is genuine, the recording took place in 1991). My protagonist’s story, just like Yerofeyev’s Venya, is a journey into the depths of imagination. We are doing this same. Yet, he goes further. His thoughts anticipate his actions. Who is he now? Where is he now?
He yearns for change, for sure. That’s why during the play, Andrzej decides to give up his present life and becomes Andy.
‚Andy‘ is a story of madness. Madness is madness. It cannot be explained.

Best European Radio Fiction Series or Serial of the Year 2013

Dealing with a historical subject, the attack of the Spanish Armada on Ireland in the 16th century, this play is full of contemporary life. The seamless storytelling develops a classic Homeric theme with humour and humanity. The jury was convinced by the highly elaborate ensemble performance and use of multilingual dialogues, which delivers the poetry in a rhythmic and surprising way, supported by evocative music with both Spanish and Irish motifs. We congratulate Ocean FM, a very small Irish station, for supporting this debut radiodrama from the Irish theatre-maker Donal O’Kelly.
The winner of the PRIX EUROPA for the Best European Radio Fiction Series or Serial of the Year 2013 is Francisco by Donal O’Kelly entered by North West Broadcasting t/a Ocean FM, Ireland (Laudator: Anna Birgersson-Dahlberg, Head of programming at the Swedish Educational Broadcasting Company).

Synopsis:
This play relates the experiences of Spanish Armada captain Francisco De Cuellar (FdC) in Ireland. In Spain he sets off to war with his friend Diego. After the first battle at sea he is sentenced to be hanged but survives thanks to an intervention by a grandee who knew him from service with the Conquistadores in Mexico. They are shipwrecked and FdC is thrown into a life-changing journey from strutting captain to wounded refugee.
Told to seek shelter with O’Rourke of Dromahaire, he is helped and hunted by people he meets. FdC finds Diego again and together they make their way for a Spanish ship. But Francisco’s leg-wound makes the journey impossible, and Diego proceeds alone. FdC shelters in a holy well. He is psychologically transported back to Mexico, where his job was to breed vicious dogs. He confesses and begs repentance. He eventually makes his way to another chieftain, McClancy.
FdC inadvertently becomes a hit with the ladies of Rossclogher, who read his new-found sense of humble truth as Latin intensity.
When Rossclogher is attacked by Queen Elizabeth’s Lord Deputy Fitzwilliam, FdC takes command of McClancy’s island fort on a frozen Lough Melvin. Fitzwilliam orders a charge, and the fort is about to be over-run, when the ice cracks and the attacking force retreats. FdC flees to Northern Ireland where he meets three women who make tweed. It’s like Paradise there until he is apprehended. The girls help FdC escape, and he is taken aboard a boat bound for Dunkirk. Miles from their destination, they are bombarded by Dutch warships. FdC advocates rebellion against blind obedience among the Spanish soldiers in Dunkirk, until he is recognised as the captain accused of cowardice. He ends up taking part in the beheading of four hundred Dutch prisoners, even though his experiences have taught him to know better.
Francisco makes his choice, but is it the only one and is it the right one? 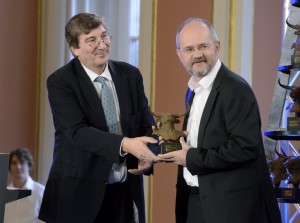 The programme immersed the listener in almost forgotten and, at the time, provocative sound world.  Fights broke out over these extraordinary instruments.  The programme conveyed the listener through an astonishing variety of environments as the strange noise machines came back to life.  The sounds also provided the opportunity for a sophisticated exploration of the philosophical and historical context.  Brilliantly edited, it encouraged the audience to engage with sounds they had never heard, and never expected to hear.
The winner of the PRIX EUROPA for the Best European Radio Music Programme of the Year 2013 is The Art of Noises (Die Kunst der Geräusche) by Thomas Fitzel entered by Rundfunk Berlin-Brandenburg (RBB), co-produced by Deutschlandfunk (DLF), Germany (Laudator: Friedrich Spangemacher, Head of Music at Saarländischer Rundfunk, Chair of the EBU Music Group).

Synopsis:
Matthias Meinharter from the First Viennese Vegetable Orchestra is particularly taken with the leek-violin in concerts. Vegetables were also involved when Luigi Russolo put his manifesto The Art of Noises into action 100 years ago. But the tomatoes thrown at the performers were the least of his worries, given the tumultuous response his concerts regularly provoked. According to this manifesto, the music of the future would not embody Wagner or Beethoven, but the ‘artfully combined noises of trams, internal combustion engines, and the screaming masses’.
For Russolo, the sound of a rippling stream was music, as was the singing whirr of the bullet that hit him in the head. The fledgling Soviet Union celebrated the roar of machines in megalomaniacal productions such as the Symphony of Sirens. And don’t forget Russolo’s spiritual Brother John Cage. So many musicians and composers were influenced by the manifesto during the 20th century.
Russolo’s mysterious intonarumori, his noise-generating devices, hummed, buzzed, rattled, cracked and gurgled strangely. Huge wooden boxes with black horns. ‘Purely in terms of their physical construction, the devices are very simple’, says Blixa Bargeld, who has always seen himself as a futurist rather than a punk musician and has composed three pieces for the intonarumori. Yet we can only guess as to the original sound and the inner workings of Russolo’s intonarumori, because apart from a few drawings and a missing gramophone record, there are no traces of them left. For forty years now, the Venetian instrument-maker Pietro Verardo has been pondering the question of how to recreate Russolo’s inventions with a dedication that is touching. In his workshop, which is periodically threatened with flooding, he tests various out materials. Yet some things must remain shrouded in mystery, such as the enharmonic bow or the russolophon.

Special commendation to the second placed entry:
Piano A to Z by Philip Tagney entered by BBC Radio 3, UK. 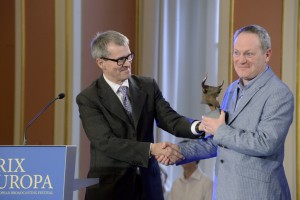 The winning documentary presents a fairy-tale gone wrong, and – with great narrative skill – tells the extraordinary story of a message-in-a-bottle, and a love affair that wasn´t to be between an American serviceman and an Irish milkmaid after the war. The global media circus that ensued in small-town Ireland is recalled in compelling oral testimony and dramatic reconstruction. And the programme has what every documentary maker wants – a surprising and poignant twist in the tail.
The winner of the PRIX EUROPA for the Best European Radio Documentary of the Year 2013 is  Documentary On One – Message in a Bottle – by Peter Mulryan entered form RTÉ Radio 1, Ireland (Laudator: Denis Nowlan, Network Manager at the BBC Radio 4).

Synopsis:
On Christmas Day 1945 American Serviceman Frank Hayostek stuffed a note into a bottle and tossed it from his troop carrier, eight months later it was found on a beach near Dingle in County Kerry by Breda O’Sullivan. He was 21, she was 18. Breda wrote back to Frank, and in turn Frank wrote to Breda – and so a trans-Atlantic friendship started. Frank put aside $30 a month to come a visit Breda, it took him six years to save enough to fly to Ireland. And so on 5 August 1952 Frank arrived in Shannon airport.
Would there be a romance? The world’s press clearly hoped so, for they picked up on this impossibly romantic story and descended on Dingle en masse. What happened next was part circus, part tragedy, but Frank and Breda’s relationship never recovered. So what happened during Frank’s two weeks in Ireland? Sixty years on Frank and Breda are no longer with us, but their letters and their respective children help tell a story that’s partly about friendship, possibly about deceit but absolutely involves bicycles.

Secret recording and confrontation can be powerful weapons in the armoury of an investigative journalist. This programme deploys them to great effect to take us inside a crisis in the Swedish psychiatry service, presenting its evidence in the style of the best detective fiction. The close working relationship between the journalist and his subject allows her – bravely – to become the investigator herself, making her much more than a victim of the system and giving the programme great authority.
The winner of the PRIX EUROPA for the Best European Radio Investigation of the Year 2013 is The Girl who Got Tied Down – ‘Captain Skirt’ is Nothing (Kapten Klänning är ingenting) by Daniel Velasco entered by SR, Sweden (Laudator: Cilla Benkö, Director General of Swedish Radio).

Synopsis:
This is a two-part programme. In episode one the Swedish audience heard ‘She has cut an angel on her arm’. Nora was taken into involuntary care as a teenager because of her self-destructive behaviour. By the age of 17 the self-destructive behaviour had become so bad that she had been selling sex at her youth care institution. The staff did not do anything about it, and one day she is tied up by a ‘john’ and raped so brutally that she ends up in hospital. When the author finds Nora the rapist is still at large. Daniel begins to interview her about what happened in the care home; why she and another girl sold sex, why the staff did not do anything about it and why the police dropped the investigation into the rape and Nora’s other customers so quickly. Daniel decides to try and track down the rapist himself. In the middle of the investigation Nora disappears and Daniel discovers that the rapist has been caught.
It turns out that her assailant is former police inspector Göran Lindberg, one of Sweden’s most senior police chiefs and a well-known feminist, nicknamed ‘Captain Skirt’ by other officers.
Here is the second installment, which we will listen to: ‘Captain Skirt is Nothing’. Nora braces herself for her meeting with Göran Lindberg in court but she breaks down afterwards. Nora finds herself taken into psychiatric care. With the aid of hidden microphones we follow Nora behind the closed doors of the mental health care services. She tries to get help by seeing a female psychologist but the senior psychiatrist will not allow it, and Nora decides to take her own life.

Special commendation to the second placed entry:
Documentary on One – The Echo Chamber: The Story of Jihad Jane by Ciaran Cassidy entered by RTÉ Radio 1, Ireland. 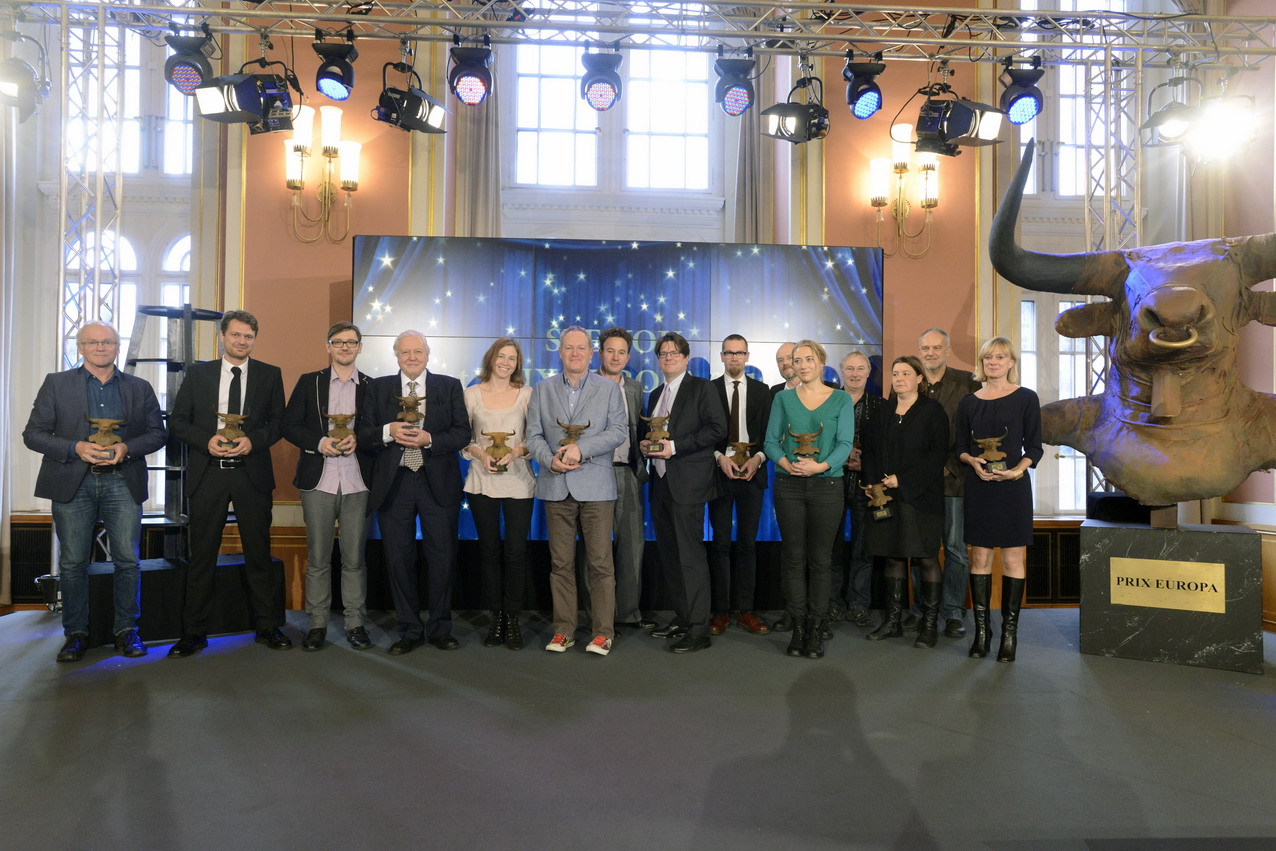